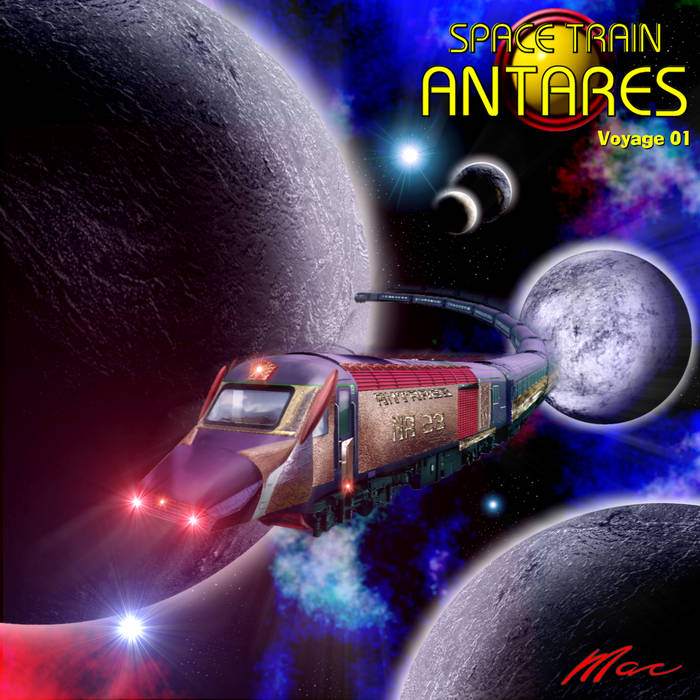 -
Antares is an enormous spaceship with a peculiar shape. Its design, as well as its function, are actually a reproduction of the ancient Earth trains from the 20th century. Just like those trains, Space Train Antares carries passengers and cargo from station to station, even if it does so travelling through the stars of our galaxy. That similarity gave the designers the inspiration for its shape, which is a reproduction of those ancient trains on a much larger scale. As a matter of fact, each one of its cars might easily contain about a hundred of those ancient train cars. Many of them are apartment complexes for passengers on a long trip, others contain a wide variety of entertaining facilities, there’s even one that contains a park with trees, a little pond, benches, etc.
Each trip is an adventure, both for the passengers and its crew!
Volume 02 is HERE: macofbionight.bandcamp.com/album/space-train-antares-vol-2-space-adventures-series-vol-09

-
Further notes:
I've always thought of trains as one of the ideal sets for a story. A train is a confined environment, and yet it moves through different surroundings. It's made of compartments, all similar, but each one of them is potentially a different world. It's a claustrofobic set, and yet it is very big. Space trains have appeared very often in science fiction, but with the sole exception of the beautiful and poetic "Ginga Tetsudo 999" by Leiji Matsumoto, none has ever been the protagonist or the main set of the story (as far as I know, at least). I've been dreaming about this space train for years, waiting for the right time to record this album. The musical ideas on this album span several years, even though I recorded it only in 2010 and 2011, and now it's here.

I was one half of BIOnighT (a Berlin School duo that split in 2011) for twelve years. I've always recorded my own stuff, though, lots of it and in no one genre. So make sure to check out all of my albums on Bandcamp, at least one is bound to belong in a genre you like!
You can also find plenty more on my website. My music is also available for licensing, just contact me macnight@inwind.it ... more

Khruangbin and Greg Foat stop by with their amazing new LPs.