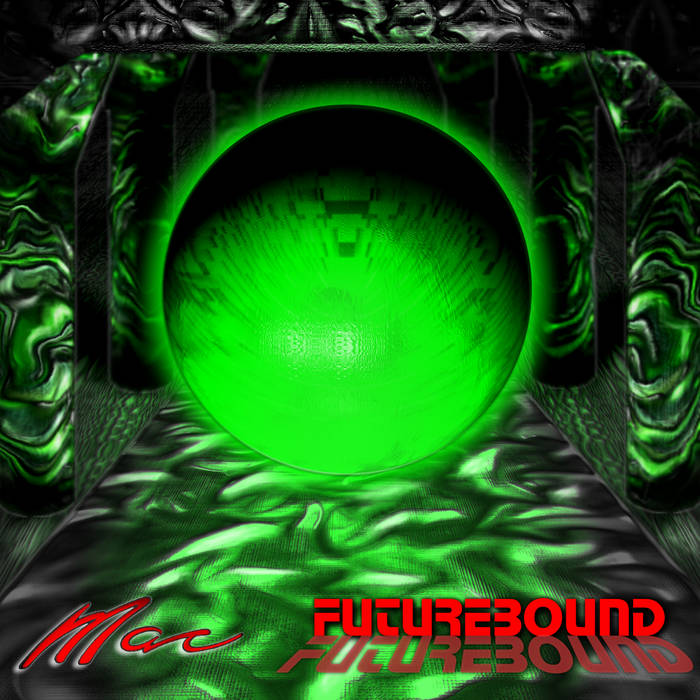 Please refer to the following page for notes about this series: macofbionight.bandcamp.com/album/introduction-to-the-sci-fi-series


The first “album” I made when I was a kid was the soundtrack to a story I had invented, a sort of techno/fantasy thing called Shador. Since then I have made several other “imaginary soundtracks” and I am now convinced that imagining a film in your mind while listening to its possible soundtrack is even better than watching a real film - or, at least, it is certainly a less passive activity. Among the imaginary soundtracks I’ve composed over the years there are two albums - “The Road” and “Futurebound” - that I recorded many years ago using exclusively a humble Roland D5.
I released them during the first years of my activity on the internet, and then I pulled them back. Still, I have a lot of affection for these two works, so I decided to re-record them using the instruments I have today. Futurebound is the first. I invite you to get your imagination in gear and create your own movie following - if you want - the suggestions for a possible plot I give below. Have fun!

He has traveled back from the future to destroy time itself with the power of the Sphere and freeze a single frame of the whole universe forever. Roger and Andrew, two cops in the big city one hundred years from now, are the only ones who have found out about him, and now they have to stop the Timekiller with the only weapon that may work and that can only be found in the mysterious Store...

1) PERCEPTUAL OVERLOAD (4.19)
(a personal note: this image actually comes from my early childhood. Occasionally, my parents would go visit my mother's brother and his family who lived about 4 hours by car from us. At one point along the way there was a series of tunnels to cross. By the time we reached them, though, I'd be dozing off and feeling totally out of touch with reality due to car sickness. Passing through those tunnels was an almost unreal experience, with the orange lights and the noise of all those cars that seemed to leak in from some place outside of this continuum. This track is a faithful representation of what I perceived.)

The dream, again, that childhood memory that kept coming back... Why? Roger had been wondering for years without ever finding an answer.

2) LOOK AT THE FUTURE (4.22)
(Main title theme)
The future is a chaotic place - skyscrapers, people of all kinds and all races. Still, some kind of balance has been reached. There's peace (as much of it as human beings are capable of), pollution has been reduced to the minimum level possible, nature has its space. Chaos, yes, but a clean sort of chaos.

3) FUTURE COPS (3.29)
Of course, there's still work for cops, as maintaining peace and order is never easy. Roger and Andrew are two policemen in the big city. They are about to find themselves in the most dangerous adventure they could ever imagine...

4) CHASE IN A CROWDED STREET (3.05)
The two cops see a man steal something from somebody's bag, or so it seems to them. They chase him through the crowded street, losing him and finding him again, until he disappears. The only place where he could have hidden is the curio shop simply called "The Store".

5) THE STORE (4.22)
The two men step inside and walk around, amazed and confused: that place just can't be so huge! From the outside it looks like a normal two-story building, but inside it seems to have no limits. It is full of objects from every place and era, from unknown devices, to everyday objects, to weapons... all of a sudden, an old man - the owner - appears in front of them.

6) FUTUREBOUND (3.41)
Everything and everybody is headed for the future, he explains, but there is one man who has traveled back from the future to our present time in order to freeze time itself and stop the whole universe forever. He can achieve that through the power of the Sphere. They have questions, but the old man says there's no time for questions: they just have to trust him. Something in his voice and eyes tells them its true. The man keeps talking: "The Timekiller can only be stopped by one weapon only, and you will find it right here, in the Store. But I can't help you find it, you will have to find it by yourselves; when you do, you will know that is what you were looking for."

7) TIMEKILLER (3.43)
They wander around the enormous Store for hours without finding either the weapon or the Timekiller. Then, suddenly, they see a blue light coming from a room. They silently get close and see him: the Timekiller. He is doing something with a big, blue, luminous sphere and doesn't seem to have noticed their presence. Cautiosly, they walk over to him, but he turns around faster than lightning and grabs them by their throats. He violently throws Andrew against a wall. The cop is on the floor, barely conscious and bleeding. "So you thought you could stop me? Is that what you thought?" snarls the Timekiller before throwing Roger against the wall as well with a crazy laughter. He walks towards the two cops with a chilling smile on his face and no hurry in his steps. Roger and Andrew are desperately looking around to find some way out of the situation, when they see a Japanese sword. The sword looks no different from all the other hundreds of swords they have seen in the Store, but they know it is. That is the weapon, they know, just like the old man said. They jump and take the sword, no words need to be spoken: they know what to do. Their hands are on the handle and they throw themselves at the Timekiller with a yell. He just stands there and waits for what he thinks will be a futile attempt, no weapon can kill him. One second before the blade touches his body, though, he suddenly feels he was wrong. The blade goes through him, blinding bolts of blue light come out of his body and mix with those coming from the sphere, his screams are deafening. And then, with no warning, all stops: the Timekiller and the Sphere have disappeared.

8) DAWN ON THE BIG CITY (2.18)
The old man is now with them and he's curing their wounds. Even if they didn't realize, they have been inside the store all night. They ask the man to help them go to the top of the building. When they reach it, dawn is breaking and its bright light is flooding everything in sight. They look at the city they've saved, along with the whole universe. It's never looked so beautiful to their eyes.